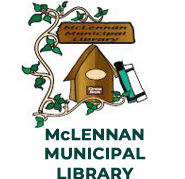 About Us Toggle navigation

History of the Library

McLennan's public library began in 1932 with just a couple of shelves in the corner of a classroom at the McLennan Public School. Miss Carrie MacKay, a teacher at the school, was a member of the Imperial Order of the Daughters of the Empire (IODE) and was the driving force behind the IODE-sponsored project. She was an avid reader and a culturally-oriented woman who stayed involved until she moved back to Ontario upon her retirement from teaching.

Miss MacKay was the first in a long line of people who gave their time to the library, which was run by volunteers for almost seventy years until the first paid librarian was hired in 2001.

The library's second home was in Jimmy's Barber Shop. Jimmy Brooks' wife was a key volunteer known as Aunty Ethel to her patrons. The library's third home was a tiny corner on the second floor of the Elks Hall. When the IODE disbanded in 1951, the library became a community library with help from town and provincial grants, but survived primarily because of a strong core of volunteers.

In the early 1970s, when the Town Office moved from the main floor of the Elks Hall to the shopping centre across the street, the Library inherited the larger space that had been vacated by the Town. Now, instead of a five-by-eight-foot corner, the library had use of a ten-by-ten-foot spot. This was where volunteers were able to set up the first card catalogue.

Over the years, the library became a community gathering spot. The movie machine was a big draw, and children came to the library for reading hour and Saturday craft programs. In 1977 the library's present name, McLennan Municipal Library, was adopted. By then the library had expanded its hours considerably from its early days when it was only open Saturday afternoons and Tuesday evenings.

In the early 1980s, the town needed a new office. Volunteer Librarian Mariette Limoges recalled that the library was invited to share the new building after government officials saw how cramped she was in the existing space. Mrs. Limoges, a music teacher and the wife of the local postmaster, ran the library for close to forty years before retiring in
2001.

In its early days, the library made do with donated books and learned to take advantage of opportunities, acquiring its first set of encyclopedias from a company that was closing its doors.

One of the prized books in the library collection, still on the shelves, is Wop May by Iris Allan. It tells the tale of Wilfrid "Wop" May's exploits as one of the early pilots in Canada's uncharted North, including a dangerous life-saving flight in 1929 to deliver medicine to Fort Vermilion, with a stopover in McLennan. Mrs. Limoges and many McLennanites were on hand in 1979 when May's son, Denny May, returned to McLennan to mark the anniversary of the race against death. "Don't get rid of that book," he told her. "It's the only one around."

Two of the greatest achievements in the library's history were the transition into the computer age and the introduction of a new system that allowed patrons to borrow material from libraries throughout Alberta.

Today, McLennan Municipal Library offers three public computers with internet access and also wireless access at no charge. We have come a long way from the card catalogue and serving patrons in a small cramped space!